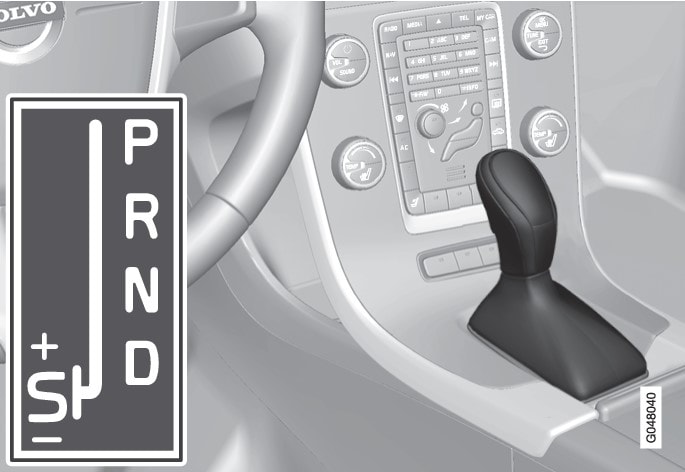 Automatic gear positions are indicated on the right of the combined instrument panel. (Only one marker is illuminated at a time - the one showing the current gear selector position.)

Symbol "S" for Sport mode is ORANGE when the mode is active.

Select P position when starting the engine or when the car is parked.

In order to be able to move the gear selector from the P position, the brake pedal must be depressed and key position must be II, see Key positions - functions at different levels.

The gearbox is mechanically blocked when the P position is engaged. Also apply the parking brake when the car is parked.

The gear selector must be in P position to allow the car to be locked and alarmed.

The car must be stationary when position P is selected.

Always apply the parking brake when parking on a slope - the automatic transmission's P position is not sufficient to hold the car in all situation.

The car must be stationary when R position is selected.

No gear is engaged and the engine can be started. Apply the parking brake if the car is stationary with the gear selector in N position.

In order to be able to move the gear selector from N to another gear position, the brake pedal must be depressed and key position must be II, see Key positions - functions at different levels.

D is the normal driving position. Shifting up and down takes place automatically based on the level of acceleration and speed. The car must be stationary when the gear selector is moved to D position from R position.

The driver can also change gear manually using the Geartronic automatic gearbox. The car engine-brakes when the accelerator pedal is released.

The manual gear position is reached by moving the lever to the side from position D to the end position at "+S-". The combined instrument panel's symbol "+S-" changes colour from WHITE to ORANGE and the digits 1, 2, 3 etc. are displayed in a box, corresponding to the gear that has just been selected.

The manual gearshift mode "+S–" can be selected at any time while driving.

Geartronic automatically shifts down if the driver allows the speed to decrease lower than a level suitable for the selected gear, in order to avoid jerking and stalling.

To return to automatic driving mode:

If the gearbox has a Sport programme then the gearbox will only become manual after the gear selector has been moved forwards or backwards in its "+S–" position. The combined instrument panel then changes indication from S to show which of the gears 1, 2, 3 etc. is engaged.

As a supplement to manual gear changing with the gear selector there are also controls located on the steering wheel, so-called "paddles".

To be able to change gear with the steering wheel paddles they must first be activated. This is by means of pulling one of the paddles toward the steering wheel - the combined instrument panel then changes indication from "D" to a figure, which indicates the current gear.

To then change gear one step: 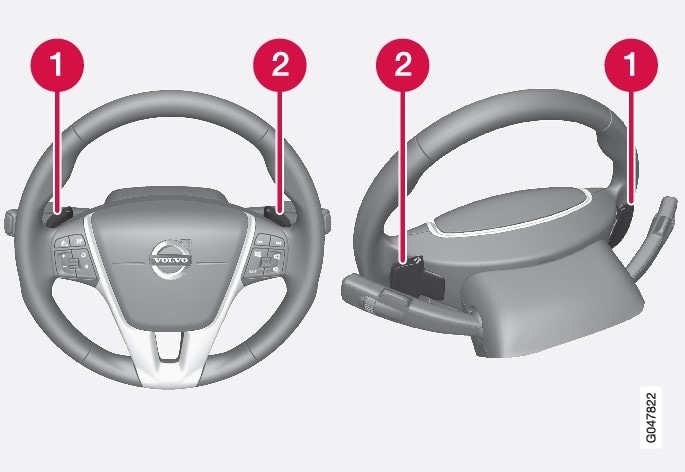 "+": Selects the next higher gear.

A gear change occurs at each pull of the paddle provided that the engine speed does not leave the permitted range.

After each gear change the combined instrument panel changes figure to show the current gear.

If the steering wheel paddles are not used then they are deactivated after a short time - this is indicated when the combined instrument panel switches indication, from the figure for the current gear back to "D".

The steering wheel paddle shifters can also be deactivated manually:

The paddles can also be used with the gear selector in Sport mode* - then the paddles are constantly activated without being deactivated.

With certain engines only.

The Sport programme provides sportier characteristics and allows higher engine speed for the gears. At the same time it responds more quickly to acceleration. During active driving, the use of a lower gear is prioritised, leading to a delayed upshift.

Sport mode can be selected at any time while driving.

It can be easier to pull away on slippery roads if 3rd gear is engaged manually.

The gearbox "winter mode" means that the car moves off with a lower engine speed and reduced engine power on the drive wheels.

When the accelerator pedal is pressed all the way to the floor (beyond the position normally regarded as full acceleration) a lower gear is immediately engaged. This is known as kick-down.

If the accelerator is released from the kick-down position, the gearbox automatically changes up.

Kick-down is used when maximum acceleration is needed, such as for overtaking.

To prevent overrevving the engine, the gearbox control program has a protective downshift inhibitor which prevents the kick-down function.

Geartronic does not permit downshifting/kick-down which would result in an engine speed high enough to damage the engine. Nothing happens if the driver still tries to shift down in this way at high engine speed – the original gear remains engaged.

When kick-down is activated the car can change one or more gears at a time depending on engine speed. The car changes up when the engine reaches its maximum speed in order to prevent damage to the engine.

If the car has to be towed - see important information in the section Towing.