The sunroof can be operated with a control in the roof panel.

The sunroof has a wind deflector.

The sunroof controls are located in the roof panel. The sunroof can be opened vertically at the rear edge and horizontally. Key position I or II is required for the sunroof to be opened. 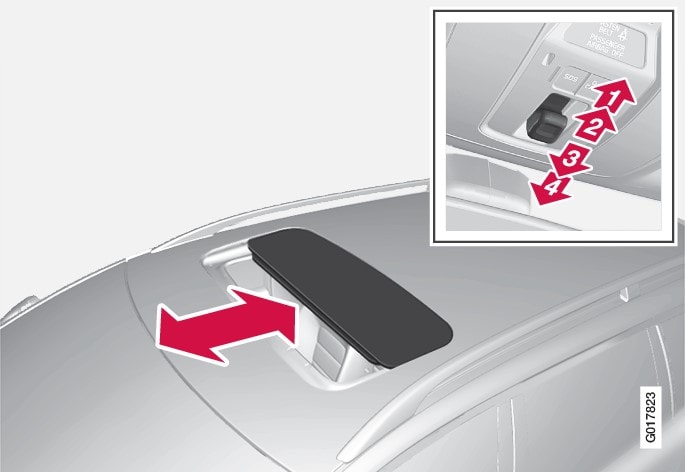 For maximum sunroof opening, move the control back to the position for automatic opening and release.

Open manually by pulling the control backwards to the point of resistance for manual opening. The sunroof moves to maximum open position as long as the button is kept depressed.

Close manually by pushing the control forwards to the point of resistance for manual closing. The sunroof moves to closed position as long as the button is kept depressed.

Risk of crushing when the sunroof is closed. The sunroof's pinch-protection function only operates during automatic closing, not manual.

Close automatically by pressing the control to the position for automatic closing and then release it.

The power supply to the sunroof is switched off by selecting key position 0 and removing the remote control key from the ignition switch.

If there are children in the car:

Remember to always switch off the power supply to the sunroof by selecting key position 0 and then take the remote control key with you when leaving the car. For information on key positions - see Key positions - functions at different levels.

Open by pressing the rear edge of the control upward.

Close by pulling the rear edge of the control down.

One long press on the lock button closes the sunroof and all the windows, see Remote control key - functions and Locking/unlocking - from the inside. The doors and the tailgate are locked. To interrupt closing, press the lock button again.

If the sunroof is closed with the remote control key, check that no one risks being trapped.

The sunroof features a manual, sliding interior sunscreen. The sunscreen slides back automatically when the sunroof is opened. Grip the handle and slide the screen forward to close it.

The sunroof's pinch protection function is triggered if it is blocked by an object during automatic closing. If blocked, the sunroof will stop and automatically open to the previous position.

The sunroof has a wind deflector that is folded up when the sunroof is in the open position.